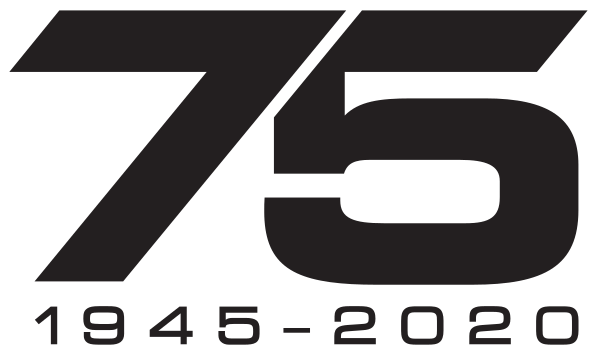 JCB, Founded in a Garage, Celebrates 75 Years in Business

JCB was founded on October 23rd, 1945 by the late Joseph Cyril Bamford in a tiny lock-up garage in the Staffordshire market town of Uttoxeter in the UK.

Story and photos by JCB, Posted by Michael Roth

JCB was founded on October 23rd, 1945 by the late Joseph Cyril Bamford in a tiny lock-up garage in the Staffordshire market town of Uttoxeter in the UK.

It was the same day as his son Anthony, now Lord Bamford, was born and as Bamford remarked, “being presented with a son tended to concentrate the mind and when you were starting at the bottom, there was only one way to go and that was up.”

The foundation for the growth that was to follow was the manufacture of a tipping trailer made from war time scrap which today stands in the showroom of JCB’s World HQ.

It was produced in his garage and sold for £45 at the town’s market. The buyer’s old cart was also taken in part exchange and Bamford refurbished it and sold for another £45 – achieving the original asking price of the trailer.

By 1947 the company was expanding and because Bamford’s landlady also disapproved of his Sunday working, he moved a few miles down the road to a stable block at Crakemarsh Hall, which was owned by a Mrs. Julia Cavendish, a survivor of the Titanic disaster. JCB also hired its first ever full-time employee, Arthur Harrison, who became foreman.

By 1950 JCB was on the move again, this time to the site of a former cheese factory in Rocester. The location had been identified by Bill Hirst, who reveled in the fact his workplace was now closer to home and enabled him to “spend an extra 10 minutes in bed.” Bill had joined JCB as a £1-a-week teaboy in 1947. He rose through the ranks to become service director.

1953 proved to be a pivotal year for new products when Bamford invented the backhoe loader with the launch of the JCB Mk 1 excavator. It was the first time a single machine had been produced with a hydraulic rear excavator and front-mounted shovel. This ingenuity still bears fruit today: JCB has manufactured more than 600,000 backhoes and they are now made on three continents. 1953 was also the year that the famous JCB logo was first used on a machine and it was eventually registered as a trademark five years later.

With the launch of a range of new backhoes, by the time the 1960s arrived it was clear this machine was revolutionizing the building industry, increasing productivity, and reducing reliance on manpower.

As the new decade dawned, the company was also harnessing new tools to generate business and promote the brand. In 1961, JCB Aviation was formed and the company’s first ever plane, a twin-engine de Havilland Dove made its inaugural flight, with customers from Europe now able to make a return visit to the factory in a single day. JCB Aviation is older than many of today’s airlines.

It was in 1962 that the JCB Dancing Diggers first took a bow and JCB’s first ever overseas subsidiary in Holland was opened. A year later the JCB 3C backhoe, an acknowledged design classic, was launched. Such was the growing success of the company that in 1964, with sales up by 60 percent to £8 million, employees shared in a £250,000 bonus. The news made national headlines and payouts were on such a scale that some employees were able to buy their first homes with the bonus they received.

Bamford declared: “I am giving you this money because I want you to share in the success of the company you have helped make.” In the same year, JCB exported its first ever machine to the United States – a JCB 4C backhoe loader.

In 1969 JCB produced a record 4,500 machines and by now was exporting more than half of them. It was in recognition of this export success, that the company received its first Queen’s Award – the first of 27 such accolades. Also, Bamford became a Commander of the British Empire (CBE) in honor of the company’s export achievements.

In 1970, JCB opened for business in the U.S., setting up a base in Whitemarsh, Baltimore, Md., to harness the huge growth opportunity North America offered.

Between 1971 and 1973 sales doubled to £40 million. In 1975 JCB’s founder retired, telling staff in a farewell message: “Anthony faces the tough job of moving JCB forward through the next decades into a new century. This is a demanding task, but he has been well trained for it and is supported by a very strong team from works staff to management. There cannot be any limit to the successes.”

ABOUT US
MAP / HOURS